How to Optimize Your Career Using LinkedIn 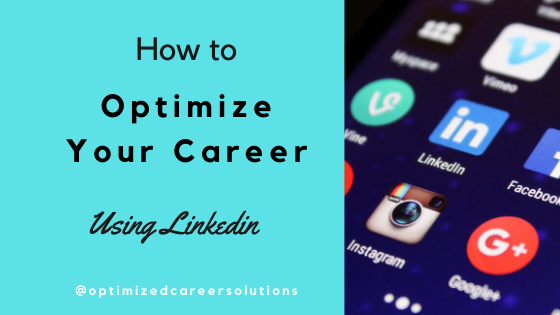 We know it’s only March, but we’re so excited for Spring! We can already hear the birds chirping, see the flowers bloom… and we also know that March is a good time to start thinking about how you’re going to tackle spring cleaning. No, not your closets—your personal messaging.

That’s why we’re releasing a two-part blog series all about LinkedIn: you’ll learn how to optimize your profile, build your network, become an industry leader, and ultimately, optimize your career.

Optimizing Your Career with LinkedIn: Part One

It’s no secret that LinkedIn is a crucial resource for people looking to either change or build upon their careers. Since its launch in 2003, LinkedIn has become a community of nearly 600 million users, distinguishing itself from other social media networks by being a powerful tool for professionals. But out of 600 million users, how can you really stand out?

We won’t bore you with the basics. By now, you should know that your profile picture or your head shot should not be a blurry selfie taken with your cell-phone camera! But your LinkedIn profile is more than just a glorified resume. With the right strategy, your profile can have a profound impact in attracting the right people to help build your pathway to success:

You might approach LinkedIn with a “quality over quantity” mindset, thinking you’ll get ahead by only accepting invitations from people you know closely or people who seem influential. On the contrary, it’s better to expand your network as much as possible. Think about it: with the way information is spread, you never know who may “like” something you post, thereby making it visible to VPs, CEOs, and other LinkedIn influencers you’re trying to target. At the end of the day, you never know who is connected to who.

The goal is to be an industry leader, which means you should be strategic in your connections, yes, but you also want to be seen by as many people as possible. Here is what to consider when building your network:

Either way, having too many people in your network who aren’t as relevant or useful to your career can create the timeline clutter that keeps you from seeing meaningful and valuable opportunities. Don’t delete connections—remember, you want your network to expand! Instead, utilize the unfollow option. Be in control of what you see so that your timeline remains a tool.

Can you believe this is only Part One of our LinkedIn series? Yes, we at Optimized Career Solutions have a lot to say about LinkedIn, and we’re excited to help you succeed by sharing everything we know! Be sure to check back for our second blog post, which will get you started on becoming an industry leader on LinkedIn.

In the meantime, let’s talk more about how we can help you build your LinkedIn profile in conjunction with your resume. Despite the difference between the two, your profile and resume work beautifully in tandem! Connect with us today and find out how!

If you missed it, our Founder, Kara, launched a mini video series in February called “Falling in Love with LinkedIn” where she shared a few of her favorite LinkedIn optimization tips! Make sure to head over to Kara’s LinkedIn and connect with her there and catch up on the mini video series to make sure you’re optimizing your LinkedIn profile!